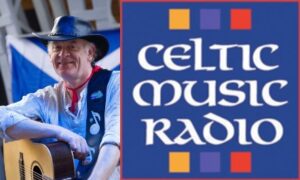 Tell us about yourself
Long an admirer of Liam Clancy and the extended Clancy/Makem families, Gavin has been involved in every Clancy Brothers Festival since it started in 2008, as musician and on-call historian to the Clancy Family. This close connection lead to a rather unique recording project. After making a very simple album of Clancy/Makem songs to sell at his festival gigs, Gavin decided to use his instrumental skills and went back to the studio where he spent weeks overdubbing everything from drums to Hammond Organ. The album was self-issued at the end of 2016.

To promote his “CMR Album Of The Week”, he came into the studio to be interviewed by both Gordon Hotchkiss and Ross McFadyen. It didn’t take long to realise that his encyclopedic musical knowledge and absolutely massive record collection had found a natural home at CMR. He started broadcasting Ballads & Balladeers in March 2017 and as a reward for the success of that show, a few months later, was given a Sunday night spot where he could play “Whatever” he liked.

Gavin curates four hours of radio for CMR every week. Both are in-depth, knowledgable and very opinionated shows and that’s the way he likes it.
“Ballads and Balladeers” focusses on what he calls “the first generation of vinyl folkies” (roughly 1960 to 1990) while “Whatever” is a theme-based show that changes every week and is aimed at the listener with more than just a casual love for music. You have to tune in to find out what the theme is, and hopefully stick around.

Why are you involved in Scottish music?
It's all about the song for me. No matter the genre, I love song. My first two folk gigs were within a week of each other in the summer of 1986. My pal, Muddy, took me to see his mentor, Paisley stalwart Davey Speirs lead a session and the following weekend I went to both nights of the Glasgow Folk Festival. I hear so many new-to-me- songs over those 3 nights. It changed my life.
I quickly found my way to the work of Morris Blythman, Jim McLean and all who came under that musical stream. These writers and performers formed my political views and taught me the history that had never been taught at school.

What are your plans for the future?
To continue to collect and broadcast otherwise unavailable folk recordings. That's the core purpose of the show.
And to keep on performing. I can't stop now.