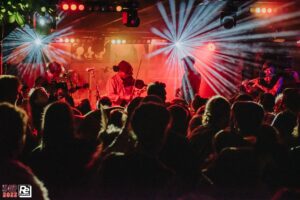 Tell us about yourself
An Dannsa Dub (The Dub Dance in Gaelic) is the brainchild of dub vocalist & producer Tom Spirals and Scottish traditional musician Euan McLaughlin formed in 2020. The 6 piece live band fuses the mystical energy and instruments of traditional Scottish music and Gaelic song with the heavy, meditative, driving basslines digital dub music. The band is a unique mix of experienced traditional folk musicians and Dub Reggae specialists, using acoustic and digital instruments. The result is an explosive heavyweight blend of what the band call ‘Future Dub from Ancient Scotland’.

Why are you involved in Scottish music?
My parents are folk musicians so I have always been around and always wanted to put a stamp on it and take it somewhere new so when the chance came up to collaborate with Tom I jumped on it as a great opportunity to take the music somewhere else.

Any particular career highlights?
As a project we've had an incredible first year getting to perform to some amazing crowds at some of the most exciting festivals across the UK including a massive show at Boomtown Fair. Tonight we're set to play our first ever show in our hometown of Glasgow to a sold out Slay alongside a massive line up of trad and dub artists!

We've both spent years touring internationally with a huge range of different artists performing across Europe, India, Australia and more and have played at some of the worlds largest events including having both performed at Glastonbury.

What are your plans for the future?
We've just brought out the first single from our upcoming album set for release in 2023. We've got some exciting collaborations in the works and are backed by the amazing An Dannsa Dub band – Nicky Kirk, Maxi Roots and Ben Parkinson. We'll also be touring throughout next year promoting the new record!