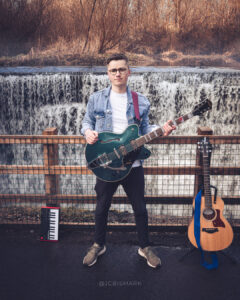 Congratulations to Ally Forsyth who has been nominated in Original Work of the Year sponsored by Gordon Duncan Memorial Trust in the MG ALBA Scots Trad Music Awards 2022. Vote for Ally Forsyth now!. It’s going to be another great night at the MG ALBA Scots Trad Music Awards on Sunday 4th December in Dundee’s Caird Hall. Why not join us for a brilliant night of music and awards. Buy a ticket here.

We asked Ally of Ally Forsyth the following questions.

Tell us about yourself
I'm a traditional musician from Aberdeenshire and I've been based in Glasgow for the last 10 years.

In 2022, I embarked on a year-long, multi release project based around the cycle of seasons. The plan was to release an EP for each season, reflecting the movement, changes and impact each season has. Spring, Summer and Autumn have been released and feature collaborations with a host of Scotlands best traditional musicians including Anna Massie, Josie Duncan and Innes Watson.

Since moving to Glasgow and graduating from at the Royal Conservatoire of Scotland, I've been working at Riverside Music College and in that time I've been involved with curating launching the Traditional Music branch of their HND performance course, teaching piano and lecturing on the business modules they offer.

Why are you involved in Scottish music?
Single handedly thanks to the National Centre for Excellence in Traditional Music in Plockton. Before that I was a classical and rock piano playing teenager that played traditional music but NCETM flipped that around and because of the brilliant tutors, facilities and talented students, traditional music became front and centre.

Any particular career highlights?
Working daily at Riverside Music College is always amazing. To be working in the same studios that have hosted bands like Travis, Teenage Fanclub, and Jerry Lee Lewis is mind-boggling!

Playing at the Royal Albert Hall with the North East Folk Collective was one of the most amazing performing experiences I've been part of.

What are your plans for the future?
Since the Summer EP was released in July, Autumn was released in October and Winter will be approaching the finish line by the time the Trad Awards come around. I'll be looking to tour the seasonal quartet of music and bring it all out into a live setting. The quartet of EPs was all written and recorded in the spare room of my house and I'd love to take some time to write a full album in the same space and style.