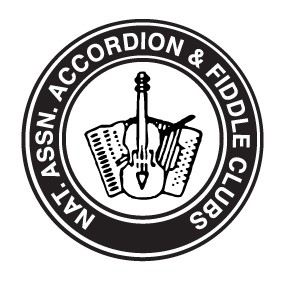 Congratulations to National Association of Accordion and Fiddle Clubs (NAAFC) Virtual Festival 2021 who have been nominated in Event of the Year sponsored by VisitScotland in the MG ALBA Scots Trad Music Awards 2021. Vote here! Vote now!

Tell us about yourself
The National Association of Accordion and Fiddle Clubs (NAAFC) began in June 1971 with an exploratory meeting in Perth followed by the inaugural meeting in the Station Hotel in Ayr on 4th July with 9 clubs represented: Perth, Gretna, Straiton, Langholm, Dundee, Newcastleton, Dumfries, Galston and Milngavie.
From the very beginning the season ran from September to May and this is still the case for many of the clubs. The end of the season is followed by the AGM and an award ceremony held on the last Sunday in June. This is an event that brings many together to celebrate the fact that the association is still as strong as ever.

Box & Fiddle Magazine
Clubs and their members are kept informed through a magazine, Box & Fiddle, and the www.boxandfiddle.com website. The magazine has over the years developed from a humble circular with information to secretaries to today’s exciting colour format with news not only about what has taken place in the previous months, but with articles, adverts, photos, news and listings of guest artistes and a monthly diary.

NAAFC Festival
The NAAFC Festival committee is responsible for organising the annual NAAFC Festival (formerly held in the Brunton Halls, Musselburgh and Inchyra Grange Hotel) but now well established at Grangemouth Town Hall. 1st March, 2014 marked the 40th Annual Festival which started from humble beginnings of only a few sections to the major event that it is today, drawing competitors from all over the country.

NAAFC Honours Award
For many years now the NAAFC has honoured most of the great and good of our music scene. The NAAFC’s intention was to honour only living recipients, hence, with a few exceptions, they have not attempted to retrospectively honour the multitude of great names who were gone before the Association’s Honours Awards were established. Photographs and short biographies of all of our former Honours Recipients can be found on our website and reads like a “Who’s Who” of Scottish musicians.

Jimmy Shand Scholarship
This scholarship, funded by the NAAFC, is awarded annually to a student studying for the BA in Scottish Traditional Music at the Royal Conservatoire of Scotland (formerly known as the RSAMD) in Glasgow and can be used by the recipient to pay for tuition, music, course materials or any other expenses associated with their studies.

Sheet Music Books
Three volumes of music by the late Angus Fitchet and “The Border City Collection” – a book of Felix Burns compositions, have been published by the NAAFC, thus ensuring that the music of these long gone maestros can be preserved for enthusiasts across the globe for years to come.

BAFFI Awards / AGM and Celebrity Luncheon
The Box and Fiddle Fellowship Input Awards are presented in June each year. Listeners are invited to vote from March 1 – April 30 for their favourite Guest Artiste, CD and Club Supporter. Guest Artistes are invited to vote for their favourite "Club of the Year". The winners are announced at the NAAFC's AGM and Celebrity Luncheon.

Why are you involved in Scottish music?
The NAAFC exists to foster and promote traditional Scottish music as a governing organisation for accordion & fiddle clubs all across the country and beyond to further the enjoyment of traditional music by supporting member clubs which provide monthly platforms for musicians of all ages and abilities to perform in public.

Any particular career highlights?
The NAAFC Festival is one of the country’s longest running voluntary music festivals in Scotland and celebrated its 47th birthday in March 2021 with a hugely successful online virtual festival with over 230 entires across various competitions for accordion, fiddle and musical groups. An entirely voluntary hard working committee oversee the organisation and running of the annual event which is held on the first Saturday in March in our new venue of Grangemouth Town Hall.

In previous years, a prize winners concert is held following the culmination of the Grand Prix event, the coveted Band section which has seen the cream of the Scottish music scene compete simply for the accolade of being the winning band at the NAAFC Festival. The atmosphere in the hall during this class is legendary as 6 piece Scottish dance bands take to the stage to battle it out for the highly prestigious prize.

The Festival is run for the love of the music by all committee members and we are indebted to the loyal support of our many sponsors, trade stands and most notably; the publicity and airtime given by BBC Radio Scotland’s Take the Floor programme over many years.

As we approach our Golden Anniversary, virtually everyone involved in Scottish traditional music has performed at the festival, which has become a not to be missed event in the traditional music calendar. The prizewinners list for each of the thirty or so classes reads like a who’s who of the good and great of the Scottish music scene.

What are your plans for the future?
Our plans for the 2022 NAAFC Festival are already well underway. Following the huge success of the 2021 Virtual online Festival, our intention is to return to Grangemouth Town Hall on Saturday 5th March 2022 for our usual live event followed by the Grand Dance to one of the country’s leading Scottish dance bands.

All musicians, listeners, dancers and enthusiasts will be made most welcome.