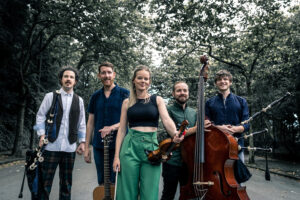 Congratulations to Breabach who have been nominated in Original Work of the Year sponsored by PRS for Music in the MG ALBA Scots Trad Music Awards 2021. Vote here! Vote now!

We asked James Lindsay of Breabach the following questions.

Tell us about yourself
Securely ranked among Scotland’s most skilled and imaginative contemporary folk acts, Breabach unite deep roots in Highland and Island tradition with the innovative musical ferment of their Glasgow base. They have released six increasingly acclaimed albums, whilst fuelling their creative appetites in collaboration with BAFTA award winning animator Cat Bruce on 'Dùsgadh' as well as joining with indigenous Australasian artists, Quebec’s Le Vent du Nord and Cape Bretoners, Beolach.
​
Their 15 year adventure has included live performances from Sydney Opera House to Central Park NY. They have racked up an impressive array of accolades including five Scots Trad Music Awards, nominations as ‘Best Group’ in the BBC Radio 2 Folk Awards and ‘European Album of the Year’ in The Songlines Music Awards.

Breabach are; Megan Henderson (Fiddle, Vocals, Step Dance), James Lindsay (Double Bass, Vocals), Calum MacCrimmon (Bagpipes, Whistle, Bouzouki, Vocals), Conal McDonagh (Bagpipes, Whistle, Vocals) and Ewan Robertson (Guitar, Vocals, Cajon). Acknowledging and respecting the origins of both the music they play and the roots of the band whilst embracing the future with new ideas, energy and belief is a key attribute of the band and has remained a constant theme throughout their 15 years.

Why are you involved in Scottish music?
See bio above

What are your plans for the future?
2022 is a new album year for Breabach and in support of their seventh full-length release will be touring across the UK as well as taking in concerts across Europe, China and Australia.