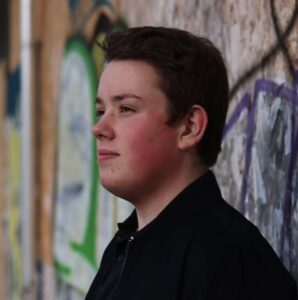 Congratulations to Arthur Coates who have been nominated in Up and Coming Artist of the Year sponsored by Royal Conservatoire of Scotland in the MG ALBA Scots Trad Music Awards 2021. Vote here! Vote now!

Tell us about yourself
Steeped in the folk music of the Shetland Islands from a young age, Arthur was brought up in a house where traditional music was on the menu everyday!
He showed interest from an early age and at 7 took his first fiddle lesson. Upon starting secondary school Arthur was offered a place at the prestigious ‘Aberdeen City Music School’ where he studied fiddle and piano. It was during his time at ‘ACMS’, through bands like ‘La Bottine Souriante’, ‘Le Vent du Nord’, ‘De Temps Antan' that he would realise his calling for Quebecois traditional music. Next stop for him would be to study sound engineering at NESCol, however Arthur would soon decide to terminate his studies in order to chase his true passion to play music full time.
In this new chapter Arthur has made big inroads in his first two years. An in demand session musician both for his skills as an accompanist and as a fiddler, His debut solo album ‘Focus’ was released in June 2019, featuring original material such as ‘Le cou casse’ and ‘La chambre verte’ and classics like ‘La belle Catherine’ and ‘Le reel en vielle’. Playing the music of this album and more, he has toured the UK accompanied by English guitarist Kerran Cotterell.

Why are you involved in Scottish music?
I've grown up with it, it's part of me!

What are your plans for the future?
– New album and show with Kerran Cotterell Summer 2022
– Continued work with 'Across : Fiddlers Collective'