RT @handsupfortrad: This weekend! Due to Covid there is a lineup change for @handsupfortrad Music Club. Unfortunately @Kinnaris5 have to bo…
RT @fngaidheal: ONLINE CONFERENCE this Friday. Gheibhear ceangal gu h-ìseal far an gabhadh clàradh a dhèanamh airson nan seiseanan eadar-d…
And we are off! Currently rockin with @cuillinmusic 's Hardland. next up we have @EmilyTriggs track Scotland. Liste… https://t.co/kitVLE8GfO
RT @Fuzzyhaggis: Check out the @handsupfortrad Tinto Autumn School on-line with @innowatso and @JosieDuncanSong. It's going to be fab! ht…
We are currently listening to beautiful voice of @jimmalcolm1 Lads o the Fair and next up we have @patsyreid Glint… https://t.co/BpAPjrNP7p
RT @raisethegame: @Block30817688 @BBCPolitics Until venues can be opened safely the hard-won expertise of musicians and performers is as wo…
RT @TobarDualchais: Thagh Christine Primrose ‘Cuimhl’ an Fhortan’ air a shèinn le Anna NicPhail à Siabost dhuinn mar clàr na seachdain. ht…
Coming up at 3pm! Mr Thoumire’s Fine Tunes starting off with the fabulous @cuillinmusic. Listen in https://t.co/L4FXJi0d9j #HUFTOnline
Read the latest Hands Up for Trad Weekly News  - https://t.co/8jhew1R6V2
The 200th Foot Stompin' Podcast is going well! Next we have a track from @LAUmusic's Midnight and Closedown followe… https://t.co/nhiWD4gSlK
RT @FDalgetty: @RonaJCampbell1 @handsupfortrad also have a series of online gigs https://t.co/LPLR146VPl
RT @Siobhan_Miller: Looking forward to playing this live streamed show on Friday night for @handsupfortrad Come join us! 🎫 👇 https://t.co/…
Next up on Mr Thoumire’s Fine Tunes we have @InnoWotso's African Waltz from Shhh I'm on the phone followed by Chan… https://t.co/AivCnpst9F
Don’t forget to buy your ticket for Siobhan Miller Band this Friday! Will be brilliant. Link in bio https://t.co/GoMiRncwzo
I can’t wait to hear the fabulous (and Award winning) Siobhan Miller band tonight! Can you? Can’t beat a live gig.… https://t.co/UXObXsdKbB
RT @TradMusicForum: Tonight! This will be great. Why not join in and have some fun with the Hands Up For Trad Strathspey and Reel Society?…
Tonight Wednesday 23rd September it's the Hands Up for Trad Strathspey and Reel Society with the fabulous… https://t.co/5CLP0756Kh
Next on Mr Thoumire’s Fine Tunes we have @heiskmusic Andina who are playing Hands Up for Trad Music Club this Satur… https://t.co/0Acy5Mj3J5
Not long now till @Siobhan_Miller Band performs at Hands Up for Trad Music Club. Gig starts at 8pm and if you haven… https://t.co/FiESGy5V5Q
Please come and join the 200th edition of the Foot Stompin' Podcast show today at 3pm today (BST) to listen to new… https://t.co/IHEDRYwwgg 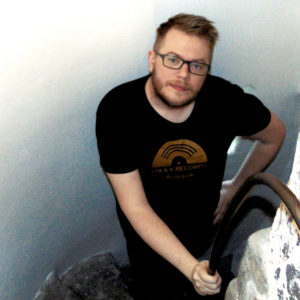 Congratulations to Tom Oakes who have been nominated in Musician of the Year sponsored by The University of the Highlands and Islands in the MG ALBA Scots Trad Music Awards 2019. Vote here! Vote now!

We asked Tom Oakes of Tom Oakes the following questions.

Tell us about yourself
I'm a flute player, guitarist and producer living in Edinburgh for the last 11 years but from the wonderful little town of Totnes (Twinned with Narnia) in South Devon. I play with Ross Couper in a duo and with OBT (Oakes, Bews + Thorpe) and also in the Lorne McDougall Trio and recently with 'The Third Half' with legends of Scottish music Allan MacDonald and Iain Macleod. I work as a Sound Designer for theatre as well and recently made my theatre debut in (Can this be) Home which won the 'New Territories' award at Prague Fringe and has since had a great run at Edinburgh Fringe as well as the Traverse and Tron theatres. I've a double solo album coming soon with one album of straight Irish trad and one of my own compositions and improvisation. The debut OBT album is coming soon as well!

Why are you involved in Scottish music?
Scotland is the ultimate melting pot for a traditional musician. Since living here I've got to know so many people throughout the entire musical spectrum and it really feels like a place where imagination is the only limit. If I wanted to go out to tomorrow and discuss starting a project with a world class tabla player, a ground breaking DJ and world famous classical cellist I could. The rational music itself is such a wonderful foundation but the branches reach far and it makes me hungry to create and play every day.

Any particular career highlights?
The National Folk Festival in Canberra, Australia with Ross this year was pretty special. Sold out gigs and lots of CD sales but a real appreciation of what we do. I also got the chance to pay a personal tribute to my flute maker Michael Grinter who passed away last year. It's such an honour to play one of us flutes ad to be able to play in front of his friends and colleagues and say thank you was a wonderful thing. In the final gig my guitar pick up broke and we did most of the gig on Fiddle and Flute. I think we were both terrified that it would be a disaster but the packed arena got right behind us. It was amazing.

What are your plans for the future?
Mentioned a lot of it already but big plans afoot! Collaboration always and crossing as many cultural boundaries as possible. I've a new label 'Window Weather' which is going to pretty busy. As mentioned a new album with OBT, double solo album. Books of tunes and a tutor guide and a very 'DIY' EP/Single series originally titled 'Collaborations' which will be self recorded with musicians who I've loved playing with for years. The first one with 'The Picasso of the Melodeon' Julian Sutton will be out by the end of the month. I'm constantly trying to think of new ways to produce music as well so looking into some unusual formats to get it out there. Touring in Scandinavia a lot feels like a glimpse into the future and there's no cash and no CD players. Interesting times!