Please come and join the 200th edition of the Foot Stompin' Podcast show today at 3pm today (BST) to listen to new… https://t.co/IHEDRYwwgg
Next up on Mr Thoumire’s Fine Tunes we have @InnoWotso's African Waltz from Shhh I'm on the phone followed by Chan… https://t.co/AivCnpst9F
Don’t forget to buy your ticket for Siobhan Miller Band this Friday! Will be brilliant. Link in bio https://t.co/GoMiRncwzo
RT @fngaidheal: ONLINE CONFERENCE this Friday. Gheibhear ceangal gu h-ìseal far an gabhadh clàradh a dhèanamh airson nan seiseanan eadar-d…
RT @handsupfortrad: This weekend! Due to Covid there is a lineup change for @handsupfortrad Music Club. Unfortunately @Kinnaris5 have to bo…
I can’t wait to hear the fabulous (and Award winning) Siobhan Miller band tonight! Can you? Can’t beat a live gig.… https://t.co/UXObXsdKbB
RT @raisethegame: @Block30817688 @BBCPolitics Until venues can be opened safely the hard-won expertise of musicians and performers is as wo…
Coming up at 3pm! Mr Thoumire’s Fine Tunes starting off with the fabulous @cuillinmusic. Listen in https://t.co/L4FXJi0d9j #HUFTOnline
The 200th Foot Stompin' Podcast is going well! Next we have a track from @LAUmusic's Midnight and Closedown followe… https://t.co/nhiWD4gSlK
Read the latest Hands Up for Trad Weekly News  - https://t.co/8jhew1R6V2
RT @FDalgetty: @RonaJCampbell1 @handsupfortrad also have a series of online gigs https://t.co/LPLR146VPl
We are currently listening to beautiful voice of @jimmalcolm1 Lads o the Fair and next up we have @patsyreid Glint… https://t.co/BpAPjrNP7p
RT @TradMusicForum: Tonight! This will be great. Why not join in and have some fun with the Hands Up For Trad Strathspey and Reel Society?…
Tonight Wednesday 23rd September it's the Hands Up for Trad Strathspey and Reel Society with the fabulous… https://t.co/5CLP0756Kh
Next on Mr Thoumire’s Fine Tunes we have @heiskmusic Andina who are playing Hands Up for Trad Music Club this Satur… https://t.co/0Acy5Mj3J5
RT @Fuzzyhaggis: Check out the @handsupfortrad Tinto Autumn School on-line with @innowatso and @JosieDuncanSong. It's going to be fab! ht…
RT @Siobhan_Miller: Looking forward to playing this live streamed show on Friday night for @handsupfortrad Come join us! 🎫 👇 https://t.co/…
Not long now till @Siobhan_Miller Band performs at Hands Up for Trad Music Club. Gig starts at 8pm and if you haven… https://t.co/FiESGy5V5Q
And we are off! Currently rockin with @cuillinmusic 's Hardland. next up we have @EmilyTriggs track Scotland. Liste… https://t.co/kitVLE8GfO
RT @TobarDualchais: Thagh Christine Primrose ‘Cuimhl’ an Fhortan’ air a shèinn le Anna NicPhail à Siabost dhuinn mar clàr na seachdain. ht… 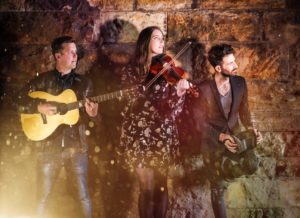 Tell us about yourself
In their five years, Scottish firebrands Talisk have stacked up several major awards for their explosively energetic yet artfully woven sound.

Mohsen Amini (concertina) – the BBC Radio 2 Folk Awards’ Musician of the Year 2018, Hayley Keenan (fiddle) and Graeme Armstrong (guitar) seamlessly meld their instruments to produce a multi-layered, enthralling signature that has effortlessly captivated audiences from the USA to Australia, and throughout the UK.
​
Appearances at world-leading festivals – including the Cambridge Folk Festival, Denmark’s Tønder, WOMAD UK and Las Palmas, the Philadelphia Folk Festival, Celtic Colours, Milwaukee Irish Festival and five successive outings at Glasgow’s Celtic Connections – have amassed a die-hard following, whilst the world’s folk and world music media have also lauded high credits upon the trio. The release of their hotly anticipated second album, Beyond, in October 2018 was met with a five-star ‘Top of the World’ review in Songlines, praising the band as “incredibly infectious and endearing… fresh, invigorating, accomplished and playfully frisky.”

Any particular career highlights?
We are so lucky to have had many highlights along the road so far but I would probably say that our biggest career highlight to date was this year when we closed the main stage on the Saturday night of Cambridge Folk Festival! We had dreamt of this from the first kick of the ball and consider it a great honour to have been given the chance! We went all out and finally got the whole Talisk show production, lights and all! A taste of what is to come! Excited!!!

What are your plans for the future?
We plan to keep going as we have been! Playing as many shows as possible but just hopefully not playing any faster than we already do haha!

Next year we will be over to the States, Canada, touring UK in May and then the standard festival runs around summer basically where ever will take us and if we can nail down some free time together there might be the glimmer of a new album, but that is a conversation that is still needing to happen!