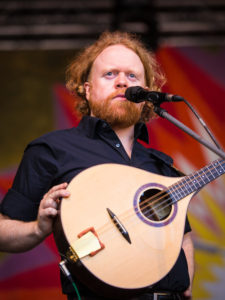 Congratulations to Steve Byrne who have been nominated in Citty Finlayson Scots Singer of the Year sponsored by TMSA in the MG ALBA Scots Trad Music Awards 2019. Vote here! Vote now!

Tell us about yourself
Steve hails from Arbroath and is known for his work with folksong band Malinky, celebrating their twentieth anniversary this year. A graduate of the School of Scottish Studies, he has worked on the Kist o Riches sound archive project and on the papers of Hamish Henderson. With 'Local Voices' he runs workshops in schools, has recently produced a CD of ballads from Walter Scott's Minstrelsy of the Scottish Border for an academic project, and worked as singing coach for Netflix's Robert the Bruce epic, Outlaw King.

Why are you involved in Scottish music?
Mainly to promote the cause of local songs in the Scots language, which I think are vital for people to help understand where they come from and have confidence in their own local traditions. It's also a real privilege to travel to places far and near and share songs with them.

Any particular career highlights?
Probably the one I can think of most recently was working with Jim Sutherland as song coach on the set of the Netflix film, Outlaw King! But there have been very many others over the past 20 years or so, playing with great heroes and fellow musicians whose music I love.

What are your plans for the future?
Ideally a second solo album! As well as more work with Malinky and community projects.