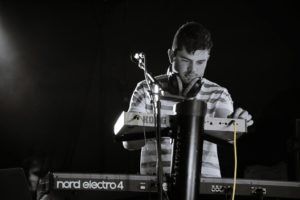 Congratulations to Ross Wilson who have been nominated in Musician of the Year sponsored by The University of the Highlands and Islands in the MG ALBA Scots Trad Music Awards 2019. Vote here! Vote now!

Tell us about yourself
Musician in various bands:

Record and produce music for various bands: Trail West, Beinn Lee but the new Tide Lines record has been taking up ALL my time.

Why are you involved in Scottish music?
I’ve been involved in traditional music from an early age – mainly starting out in Scottish Dance Band music. After a move to Glasgow in 2008 to study sound engineering I began dabbling in all genres of music and integrating electronics and the sound design aspect of my life in to the music.

Any particular career highlights?
The formation of Tide Lines and watching the band grow.

Every gig with the League of Highland Gentlemen has been a career highlight.

What are your plans for the future?
Tide Lines is the main focus right now but I’ve got a lot of stuff on the back burner so winning an award like this would probably force me to get some of that stuff out to the world.