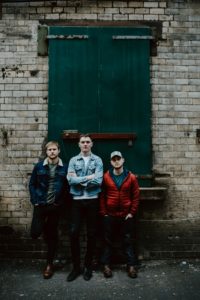 Congratulations to Project Smok who have been nominated in Belhaven Bursary for Innovation in the MG ALBA Scots Trad Music Awards 2019. Vote here! Vote now!

We asked Pablo Lafuente of Project Smok the following questions.

Tell us about yourself
Bringing together three of Scottish music’s most exciting young players – Ali Levack (pipes/whistles), Pablo Lafuente (guitar) and Ewan Baird (bodhran) – Project Smok revitalise their native West Coast traditions with a high-octane brew of funk, jazz and electronic stylings, and are soon to release the follow-up to their superb debut album Horizons. “Sophisticated and intricate. . . sheer, unadulterated virtuosity” (MNPR Magazine)

Why are you involved in Scottish music?
We’ve each been raised learning Traditional Music from an early age through organisations such as Fèis Rois/Plockton Music School/Music Festivals/Hands Up For Trad. As well as our attraction to Scottish Traditional Music as it is, what has particularly driven each of us in the band is how we can make a difference to how it is perceived and bringing it to a wider audience.

Any particular career highlights?
• Launch of our Debut Record, ‘Horizons’ at Celtic Connections 2018.

• Nominated for ‘Best Up and Coming Artist’ at the MG Alba Scots Trad Music Awards 2018.

•Collaborating with Edwyn Collins and recording with him on our forthcoming Album.

What are your plans for the future?
We are launching our Debut Album at Celtic Connections 2020 at the Old Fruitmarket.
We have been extremely fortunate to perform at such great Festivals/Venues since the band began, as well as working alongside and collaborating with other gifted musicians.
We hope that with the launch of our brand new album in February, we will be able to continue performing at a high level more often as ‘Project Smok’.
Bringing our music to a wider audience and creating a larger fan base for traditional music has been a core incentive for us as a band and we feel that this award would greatly benefit us in being able to do so.