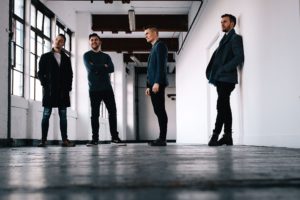 Congratulations to Tide Lines who have been nominated in Belhaven Bursary for Innovation in the MG ALBA Scots Trad Music Awards 2018. Vote now!

We asked Robert Robertson of Tide Lines the following questions.

Tell us about yourself
Tide Lines formed in the summer of 2016. All four of us are from the Highlands but based in Glasgow. In the two years since the band's conception, we have released a number of digital singles, a debut album (Dreams We Never Lost), and an EP (Let's Make Tonight) – whilst playing live at various festivals and tours.

Why are you involved in Scottish music?
Gaelic music in particular has influenced us from a young age; and, although our own material is primarily in English, it's difficult for us to imagine producing music that isn't lyrically and musically inspired by that tradition.

Any particular career highlights?
Big festivals are always particularly enjoyable – from Tonder in Denmark to the likes of Belladrum and HebCelt. Our first ever gig together at Tiree Music Festival will always be a great memory; and, at the moment, we're on a 29 date UK tour which we won't forget for a while!

What are your plans for the future?
Looking forward to our biggest headline show to date in SWG3 in Glasgow in December. And at some point there will be a second album on the cards.