RT @JaneyGodley: Two Women being dragged by 🇬🇧 men online for doing Scottish poetry and language on this, the month of Rabbie Burns, so ple…
RT @StrathallanSchl: Ever wanted to learn the chanter? 🎶 Our Director of Piping and Drumming @craigmuirhead is teaching the basics to begi…
And Mr Thoumire’s Fine Tunes is off! Starting off with the brilliant @meclirband Repeal the Union followed by… https://t.co/2yMN9ReGkP
Wow @JosieDuncanSong! Your @ccfest New Voices is sounding amazing! Fabulous poppy songs and arrangements. @thetimesscot
Nigel Richard RIP https://t.co/khNkUx5sdO
On the podcast next up we have @theohhellos. I love this band! we will follow it with the new single from @lapwyng… https://t.co/Y57KOoQI2v
Have you tried the Hands Up for Trad Strathspey and Reel Society yet with @ClaireGullan? The 3rd term will start ne… https://t.co/wVxvO2Jpzn
Next on Mr Thoumire’s Fine Tunes we have @SKERRYVORE's You & I then we will finish the podcast with @RonJappyMusic'… https://t.co/Xi08h3JM3P
Read the latest Hands Up for Trad Weekly News  - https://t.co/ikmFdYgcL4
Celtic Connections programme announced! Read all about the amazing lineup here https://t.co/Hilrv2MBkU @ccfest… https://t.co/ecpUbBvn1Q
RT @NapierHamish: Why not take a few minutes out tonight (twelve to be exact'ish) for a 7pm dram and tune into our wee storytelling film? B…
Next up we have the late Nigel Richard singing For Your Love from his album Not Before Time. Then it's the fabulous… https://t.co/rSZ5CMd2BM
I'm doing an impromptu live recording of the Foot Stompin podcast at midday. Loads of great music starting off with… https://t.co/TOyt6KOJzB
RT @ClashCityClarky: This is awfy braw stuff frae @ionafyfe on the journey mair an mair o us hae been makkin this past wee while - frae no…
Loved #albaceilidh last night! Great music from @trailwestband @SIANceol @peatanddiesel @GFCeilidhBand @NicUalraig… https://t.co/KZ9yglx7nU
Don't miss this! Love Singing - Opportunities for Choirs & Songwriters https://t.co/aw5a6AQbZN @LoveMusicScot https://t.co/ziehqGenLJ
Review: And We Are Off! Celtic Connections 2021 Opening Concert https://t.co/UxpOIJFYx8 @ccfest @TradMusicForum… https://t.co/YBqVMq0kCx
Next on Mr Thoumire’s Fine Tunes we have the latest release from accordion player Will Marshall: Destination - Home… https://t.co/sRlzOv4NMP
RT @scottishmusic: INTRODUCING @BBCRadioScot Young Traditional Musician Award 2021 finalists > @ionafyfe (Vocals), @elliesbeaton (Vocals),…
Next up we have our Hands Up for Trad Single of The Week Fatma's Waltz by @adamfiddle raising money for Beatson Can… https://t.co/5cy7EjGUFU 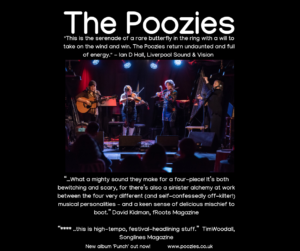 Congratulations to The Poozies who have been nominated in Album of the Year sponsored by Birnam CD in the MG ALBA Scots Trad Music Awards 2018. Vote now!

We asked Eilidh Shaw of The Poozies the following questions.

Tell us about yourself
The Poozies were at the forefront of a wave that revolutionised traditional music in Scotland in the 1990s. They have since become an important institution, both within Scotland and as international ambassadors of Scottish music. The band has continued to develop over time, incorporating new influences while evolving and remaining fresh. This album sees original member Mary Macmaster and longtime cohort Eilidh Shaw joined by Orkney's Sarah McFadyen on fiddle, 5-string banjo and vocals, and Tia Files from Oban on driving guitar and bass drum, giving the band a fresher, edgier sound. The album 'Punch' has had fantastic reviews, with quotes such as:
“**** ..this is high-tempo, festival-headlining stuff.” TimWoodall, Songlines Magazine
“..outstanding originals, virtuoso interpretations and unexpected arrangements take you into uncharted realms … unique spheres that need no labels.” Tim Carroll, FolkWords
“…What a mighty sound they make for a four-piece! It’s both bewitching and scary, for there’s also a sinister alchemy at work between the four very different (and self-confessedly off-kilter!) musical personalities – and a keen sense of delicious mischief to boot.” David Kidman, fRoots Magazine

Why are you involved in Scottish music?
That's where the money is! 😉

Any particular career highlights?
The band has enjoyed prodigious success with numerous successful tours of Germany, Italy, Denmark, Holland, Belgium, Scotland and England. They were chosen to represent Britain in Egypt and Turkey by the British Council, and are previous winners of the Eiserner Eversteiner Folk Award in Plauen, Germany. They have won the fastest-selling act at Glasgow’s Celtic Connections and have appeared at international festivals in Woodford, Illawarra, Cologne, Rudolstadt, Skagen, Tønder, and many others.

What are your plans for the future?
The band are looking forward to a great 2019 with three UK tours already lined up and several festivals at home and abroad.