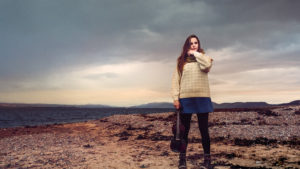 Congratulations to Lauren MacColl who have been nominated in Album of the Year sponsored by Birnam CD in the MG ALBA Scots Trad Music Awards 2018. Vote now!

Tell us about yourself
In 2017 Lauren premiered a new commission for Feis Rois titled 'The Seer' – 40 minutes of music based on the life and prophecies of the Brahan Seer. The album which followed was well received following a launch at Blas Festival and the legecy of the music has seen it performed by many youth groups across the country.

Lauren MacColl is considered one of Scotland’s most expressive fiddle players.
Originally from the Black Isle, she was immersed in the rich culture of the Highlands from a young age, learning her traditional music through the Feisean movement in Ross-Shire. She continues to be inspired by old music from her home area, those tunes forming much of her repertoire.

​In 2004 Lauren won the BBC Radio 2 Young Folk Award as a soloist, a platform for her to launch her career with her band ‘The MacCollective’, with whom she released two acclaimed albums on her own her own label, ‘When Leaves Fall‘ and ‘Strewn with Ribbons‘. The former was named ‘Classic Album‘ of Celtic Connections Festival 2008, and the second led to her win of the title ‘Instrumentalist of the Year’ at The MG Alba Scots Trad Music Awards 2009.

Lauren currently performs with many regular projects: with chamber-folk quartet RANT, on viola and fiddle with Salt House , with Rachel Newton and in a duo with flautist Calum Stewart. She appears regularly as a session musician and has been fiddle tutor at the Junior Conservatoire of RCS for 12 years. Her passion for teaching led to setting up the Black Isle Fiddle Weekend in 2001, a yearly sell-out.

Why are you involved in Scottish music?
Predominately for the love of the music, spurred on by our great inclusive community of musicians.

Any particular career highlights?
Realising 'The Seer' was a major personal and professional achievement and a joy to work with the musicians involved.

What are your plans for the future?
In 2019, an excerpt from The Seer will feature in Celtic Connections opening concert, performed by a large ensemble of young musicians, and the album line-up will tour the album throughout Scotland in June 2019.
I will also record a new solo album next year so well as new music with RANT and Salt House.