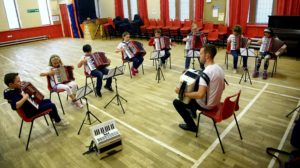 Congratulations to Grant McFarlane who have been nominated in Music Tutor of the Year sponsored by Creative Scotland Youth Music Initiative in the MG ALBA Scots Trad Music Awards 2018. Vote now!

Tell us about yourself
I am an accordion player from Paisley, working full-time in traditional music with a number of organisations as well as freelance. I have been lucky to forge a career within the Scottish music scene and now dedicate much of my working week to education and teaching. Working with young people is one of the best parts of what I do and after delivering accordion tuition for both the Royal Conservatoire of Scotland Musicworks programme and at Fèisean (Gaelic arts tuition festivals) across Scotland , I moved to setup a Fèis in my hometown of Paisley in 2015. I now work as the events co-ordinator for the organisation, organising and delivering a year round programme of events that gives young people aged 8-18 opportunities in traditional music. I am a tutor at the Renfrewshire Schools Ceilidh Band, a trad. youth orchestra compromising around 30 young local musicians, which takes place on Monday evenings as well as teaching privately throughout the week. As a musician with Live Music Now, I deliver music workshops in schools, to young people with additional support needs and intergenerational sessions with mixed age and ability levels.

Why are you involved in Scottish music?
I was given the opportunity in primary school to learn the accordion, an instrument I hadn’t heard of before. With a gentle push from my dad, I signed up and have never looked back… apart from when checking if my dad was managing to carry it up the stairs for my lessons. One of my high school music-teachers, Jenny MacLeod, was hugely passionate about traditional music and encouraged me to play as much as I could, as often as I could. I started playing ceilidhs at a young age and absolutely loved performing so when the time came to choose the next steps after high school, I applied to the RCS and was lucky enough to secure a place. I fell in love with the Scottish music scene and all that it could offer as a career. In recent years, I’ve worked hard to give the same opportunities to young people that I was afforded and hopefully inspire the next generation of traditional musicians.

Any particular career highlights?
As part of the band CherryGrove, I performed at festivals in France, India and Australia. Alongside other projects in America and Europe, I feel lucky to have visited many of these countries which I may otherwise not have had the chance to. As a music tutor, organising and delivering the first ever Fèis Week in Paisley was an incredibly special moment with around 60 young people picking up traditional instruments and performing alongside their tutors. The Fèis continues to grow with over 100 participants attending our annual Fèis Week and around 40 young people taking part in our weekly lessons on Saturday mornings.

What are your plans for the future?
Finding new and innovative ways to engage our young people with traditional music is vital to ensuring the continued growth of the traditional music scene. As well as continuing to perform and develop my own playing, I am excited to create new ways for young people to start playing Scottish music.