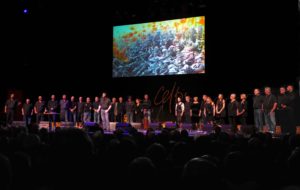 Congratulations to Far, Far From Ypres. who have been nominated in Event of the Year sponsored by VisitScotland in the MG ALBA Scots Trad Music Awards 2018. Vote now!

We asked Ian McCalman of Far, Far From Ypres. the following questions.

Why are you involved in Scottish music?
Life long interest in music, world tours with "The McCalmans" since 1964, "Hamish Henderson award", 6 TV series, been there, done that, still doing it.
Ian McCalman

What are your plans for the future?
Retire, but tried that before. Doesn't seem to work.