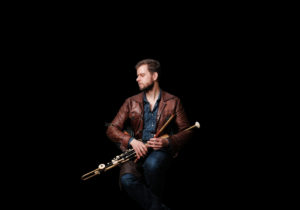 Congratulations to Calum Stewart who have been nominated in Instrumentalist of the Year sponsored by Royal Scottish Country Dance Society in the MG ALBA Scots Trad Music Awards 2018. Vote now!

Tell us about yourself
A leading Uilleann Piper, Calum Stewart’s powerful and lyrical playing style is rooted in the traditional music of his native northern Scotland. His distinct musical voice has been developed through collaborations within the Scottish and Irish traditions.

“An astounding Uilleann Piper … Music that runs as pure as a Highland stream.”
ACOUSTIC Magazine.

“Hits you right between the eyes. Outstanding”
The Living Tradition.

“Calum Stewart joins the ranks of thoroughly modern Uilleann Pipers, who are steeped in their own tradition but cross borders to bring in other influences, and can write a damned fine tune”.
Folk Radio

Why are you involved in Scottish music?
Because it's my life's blood! Grew up with it in the household, part of my life since childhood. No matter where in the world I am, touring and playing, the music of home is always central.