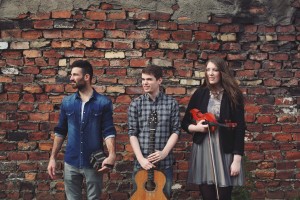 Congratulations to Talisk who have been nominated in Up and Coming Artist of the Year sponsored by Royal Conservatoire of Scotland in the MG ALBA Scots Trad Music Awards 2015. Vote now!

Tell us about yourself
Winners of the BBC Radio 2 Young Folk Award, Talisk have already made a big impression on the folk music scene since their formation in August last year. The group also won a coveted Danny Kyle Award at Celtic Connections 2015 and have performed live in session on BBC Radio 2.

Why are you involved in Scottish music?
Mohsen came through comhaltas learning Irish music and soon immersed himself in the Glasgow music scene where the Scottish music is very vibrant and he was hooked on it whereas Hayley and Craig both learned their music from a Scottish background with Hayley going to there Feis and Craig studying in Benbecula.

Any particular career highlights?
I would have to say the highlights of our career as Talisk would be firstly winning the Danny Kyle award at the start of the year but better than that would be winning the BBC Radio 2 Young Folk Award shortly after giving us the chance to play at some of the biggest festivals in traditional music.

What are your plans for the future?
We are planning to bring our debut album out in May 2016 and launching it all around the UK.