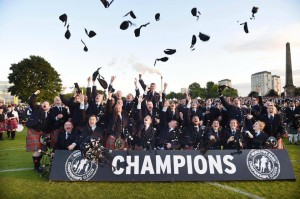 Congratulations to Shotts and Dykehead Caledonia Pipe Band who have been nominated in Pipe band of the Year sponsored by The National Piping Centre in the MG ALBA Scots Trad Music Awards 2015. Vote now!

Tell us about yourself
Shotts and Dykehead Caledonia Pipe Band are the 2015 winners of the Grade 1 RSPBA World Pipe Band Championship. One of the most successful pipe bands of all time, Shotts and Dykehead Caledonia has been a piping and drumming institution for over a century, and has won more World titles in its 105 year history than any other band since the World Pipe Band Championship was first introduced in 1947. With the 2015 win, Shotts remains the only pipe band in history to have won at least one World title in every decade since the World’s began.

Why are you involved in Scottish music?
Shotts and Dykehead Caledonia is a competition pipe band, has been at the forefront of piping and drumming excellence in almost every decade of its existence. The band today is the legacy of some of the most celebrated piping and drumming legends in pipe band history, who each in their own eras, have contributed something unique and special to Scottish music. The band today is motivated by the pursuit of musical excellence in competition, aims to uphold the legacy of one of the pipe band world’s greatest institutions, and puts its all into giving back to our community and to Scottish youth through our annual junior competition.

Any particular career highlights?
In 2015, Shotts and Dykehead Caledonia was named Grade 1 RSPBA World Pipe Band Champions, bringing the title back to Scotland for the first time in 10 years. The win was a remarkable achievement for a band which, only three years ago, was at the very bottom of the grade. The 2015 win is the quickest ascent to the World title of any band under a new Pipe Major in the last 45 years. It is also only the second time in history that a pipe band has won the World Championship without previously winning a major title with its current leadership. With the majority of the band’s membership having been rebuilt over the last three years, the 2015 win saw 27 out of the band’s 38 playing members become World Champions for the very first time.

Just as important as the band’s competition schedule, has been the running of its annual Shotts and Dykehead Piping and Drumming Championship for youngsters across Scotland. The band was originally founded with ties to the old Shotts colliery, and a strong community element was always at the heart of its activity. Whilst this community element had died away in recent years, under new direction, in 2014 the band founded its annual junior competition in partnership with North Lanarkshire Council. The competition is the primary way in which the band has been able to give back to the North Lanarkshire community from which it comes, as well as supporting youth piping and drumming more widely across Scotland. The planning and running of the contest is done on a completely voluntary basis, with band members donating their time over several months each year to prepare for the event. In 2015, the competition entry included over 150 youngsters, making it one of the largest junior solo piping and drumming competitions in the whole of Scotland.

What are your plans for the future?
The band has recently undergone a leadership change in its drum corps, and will now be working to rebuild its drum section, just as its pipe section has been rebuilt over the last three years before this. It will continue to puts its efforts into the annual junior competition, and in August 2016, will seek to defend its World title at Glasgow Green. Shotts and Dykehead Caledonia is a 105-year old institution, and cycles of rebirth throughout each era of its history is part of its story, and its resilience. We look forward to continuing that story in 2016 and beyond.