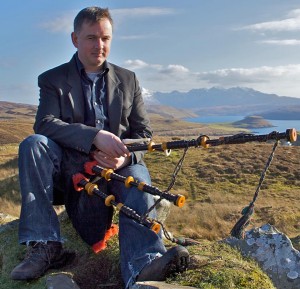 Congratulations to Peter Morrison who have been nominated in Composer of the Year sponsored by PRS for Music in the MG ALBA Scots Trad Music Awards 2015. Vote now!

Tell us about yourself
I’m a piper, whistle player and composer from the Isle of Skye and a founder member of Peatbog Faeries

Why are you involved in Scottish music?
I began playing pipes in Skye 38 years ago at the age of 8 and have been involved in Traditional music ever since, playing ceilidhs, weddings, funerals and gigs.

Any particular career highlights?
Mostly through the Peatbog Faeries, headlining well known festivals round the world and winning Live Act of the Year twice. Representing Scotland in Sri Lanka for the successful Glasgow bid for the 2014 Commonwealth games was a particular highlight.

What are your plans for the future?
Hopefully to continue playing and recording with the Peatbog Faeries. I hope to publish a tune book of my own tunes and my arrangements of old tunes from Skye and the surrounding area. I’m working with Ross Couper, who I play with in the Peatbogs, and Seumas MacLennan from Skye, who I host sessions and play gigs locally with. As a trio we intend to record and tour tunes from our native Skye and Shetland as well as some original materiel.