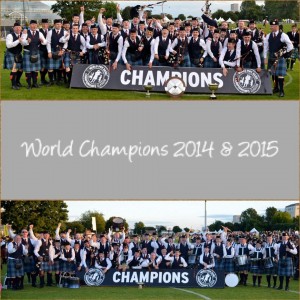 Congratulations to Johnstone Pipe Band who have been nominated in Pipe band of the Year sponsored by The National Piping Centre in the MG ALBA Scots Trad Music Awards 2015. Vote now!

Tell us about yourself
Johnstone Pipe Band was formed in 1943 and is one of the older members of the Royal Scottish Pipe Band Association. The band has a solid reputation in the competition circuit and can be seen at various Highland Games and Pipe Band Championships throughout the season. The band is also a regular participant at festivals at home and abroad and has just been invited to attend the Virginia International Tattoo in 2017.throughout the season.

Why are you involved in Scottish music?
The band is committed to the improvement in Pipe Band musicianship and to this end has adopted a successful youth development programme. A testament of the success of the programme is the number of players from the band who have featured in the ranks of the National Youth Pipe Band and who have enrolled in the degree course at the Royal Conservatoire. The band also fully embraces the competitive environment to test our development featuring a mix of traditional tunes with new compositions, many by our bandsmen.

Any particular career highlights?
The band has a long and proud history with many highlights along the way, however the achievements in 2014 and 2015 are clearly the headliners.

In 2015 the band found themselves promoted to Grade 2 with a new Pipe Major Keith James Bowes. The transition from Grade 3A to Grade 2 is notoriously tough and where many promoted bands struggle to get off the bottom: finishing the season even in mid table is unheard of.

Back to Back World Champions

What are your plans for the future?
The band is already working hard in preparation for next years competitions where we hope to consolidate our position in Grade 2 and our obvious target is promotion to Grade 1.

The band also has a Grade 4B band, which currently provides an entry point for novice pipers and drummers. The band is a mixture of novice and experienced bandsmen.

The intends to continue working with Renfrewshire Council, Creative Scotland and the Scottish Schools Pipe Band Trust in local schools and plans to start a Novice Juvenile Pipe in 2017.