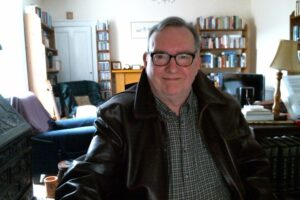 His collection of classical Chinese poetry in Scots, Staunin Ma Lane, was published by Shearsman Books in 2016, and his Hard Roads an Cauld Hairst Winds: Li Bai an Du Fu in Scots was published by Taproot Press in 2022. His Scots translations of Song Dynasty lyrics, Aa Cled Wi Clouds She Cam, is coming from Irish Pages in July 2022.

He makes regular appearances at conferences and literary festivals, and has lectured at universities in the UK, Europe, the USA, Canada, New Zealand, Hong Kong, China, and elsewhere. He has won prizes for his translations, and for his own original poetry.
He lives in Melrose, and plays and sings the music of his native Border country.

Whit wis it got ye involvit wi the Scots leid?
Ma mither wis frae Galae, an her fowk wis aa Galae an Selkirk, an they aa spak a guid auld-farrant an brain border Scots, sae A hed it fra A wis a bairn. At Galae Academy oo wir lairnit Scots literature alang wi the English, sae A read aathing frae the Makars ti MacDiarmid then. A stertit scrievin in Scots in the back-en o the '70s, whan A owreset frae the Chinese a wheen chapters o Men o the Mossflow (Shuihu Zhuan).