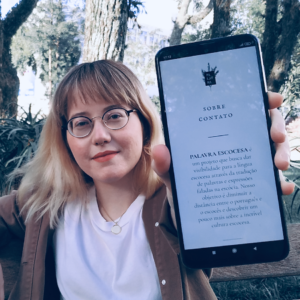 Tell us aboot yersel or yer ootfit.
Palavra Escocesa is a Brazilian project created to give visibility to Scots. There you can find information about both the Scots language and Scottish culture. Twice a week – on Mondays and Fridays – I post a word in Scots and its meaning in Portuguese on Twitter, Instagram and Tiktok. I also make content about Scottish music, geography, folklore, politics, and more.

Whit wis it got ye involvit wi the Scots leid?
When I visited Edinburgh, I was fascinated by its architecture and atmosphere. It was so different from the other places I had visited in Europe. I was very impressed with how solicitous and patient people were. Edinburgh had my heart from day one.

Back in Brazil, I started to search about Scotland. During this process, I found out that what I thought was a dialect was in fact a whole different language. The Scots language. And that was when I decided I wanted to learn Scots.

In 2020, Len Pennie started the project ‘Scots Word of the Day’, where she shares a different Scots word every day, poems in Scots and the origin of Scottish expressions. As I learned about Scots and its history, I realised that many people in Brazil do not know anything about this subject.

Unfortunately, even if I wanted to share Len’s content with other Brazilians, not everyone would understand it. Today, due to a lack of investment in education, only 5% of Brazilians speak English. To make it accessible, I would have to translate it to Portuguese. And that is why I created Palavra Escocesa.

Ony particlar career heighlichts
Although established in Brazil, Palavra Escocesa has created a community of people from all around the world. People who respect and value Scotland’s identity and who contribute to the project. I've got to know Scottish people living in Brazil, Scottish people who speak Portuguese, Brazilians and other Portuguese speakers who live in Scotland… It's amazing to know how Brazil and Scotland are so connected, even though they're far apart.

Wha’s yer plans fir the days aheid?
Palavra Escocesa’s goal is to reduce the distances between Portuguese and Scots. I will keep on doing that by creating more content about Scotland in Portuguese, so other Brazilians and Portuguese speakers can learn about this charming place. Perhaps this will even inspire people to share what they know about other indigenous languages and marginalised cultures.