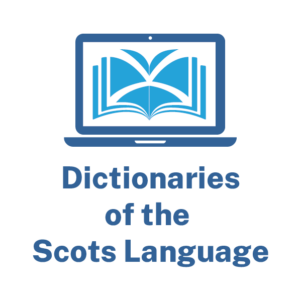 Tell us aboot yersel or yer ootfit.
Dictionaries of the Scots Language have been making Scots language dictionaries for almost a century. Our publications—in print, online, and as mobile applications—provide a unique record of the language, history, culture, and traditions of the Scots-speaking people. Our Słownik podstawowy szkocko-polski | Essential Scots-Polish Dictionary app is free to use and has been designed to help Polish migrants in Scotland feel more at home and part of the local community.

Whit wis it got ye involvit wi the Scots leid?
Our dictionaries are the work of several generations of editors, assistants and administrators, all sharing a commitment to maintaining the national record of Scots for current and future generations of Scots speakers, readers, writers, learners, teachers and scholars.

Ony particlar career heighlichts
Dictionaries of the Scots Language Online brings together two older publications compiled during the 20th century and originally published in print: A Dictionary of the Older Scottish Tongue and the Scottish National Dictionary. Together the 22 volumes of these mighty dictionaries run to 12,000 pages on which nine centuries of language use is captured in 75,000 entries and 750,000 illustrative quotations.

Wha’s yer plans fir the days aheid?
The work of a dictionary editor is never done! We are constantly working on ways to improve the content and interface of Dictionaries of the Scots Language Online.