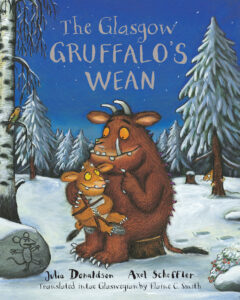 Whit wis it got ye involvit wi the Scots leid?
It seems absolutely essential to me that we keep alive the language and dialects of Scotland and do as much as we can to allow them to flourish. The rich, descriptive dialects of all regions of Scotland are precious but have been under threat for many years. I was brought up in a time when speaking local language and dialect was viewed as slovenly, lazy and base and all were encouraged through the educational system to learn and speak English with a not too strong or guttural Scottish accent. The older I became I realised – especially in drama college – that I was being taught to feel ashamed of my way of speaking, my language and my culture. As a country we have done well to defy the domination of one way of speaking and have become trilingual – we speak English, Scots and our local dialect and that should be celebrated and that’s why I was so delighted to write in Glaswegian.