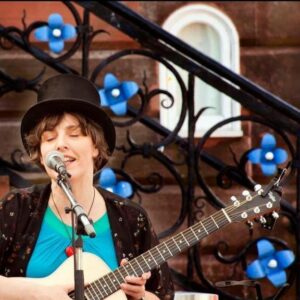 Whit wis it got ye involvit wi the Scots leid?
The love o the leid, an haein the luck tae meet an be influenced by some braw writers an spikkers locally. Ah moved tae Gallowa as a wean, wi a Shetland accent, an ended up wi a lot o Gallowa but at hame it was ''proper English'', but the soons o th Scots aroon me fascinated me. In my twenties poetry readings in modern an auler Scots made me think oan aboot Scots an inspired me tae gaun further an explore mair wi the Scots leid.

Ony particlar career heighlichts
Workin oan, screivin and recording, then the launch o Moonstruck, and the Scottish and American tour that came aifter.

Wha’s yer plans fir the days aheid?
Ah'm at the late stages of an album o Stuart A Paterson's A Squatter o Bairnrhymes, a in Scots, that is planned tae be oot in October released bi Scotsoun.
The CatStrand Singers are a choir whae meet in New Galloway an Ah hae recently wrote an arranged 17 sangs, some in Scots fir thaim an a, an there will be an album an a buik frae that project early next year. Again wirds and poems o local Scots writers hae been yaised, as weel as some in English.