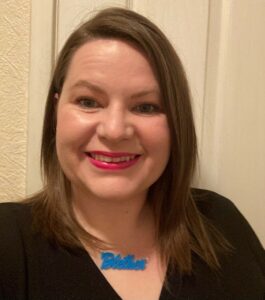 Whit wis it got ye involvit wi the Scots leid?
There is a lot o freedom in the English curriculum to teach yir passions. I’ve ayewis used Scots texts by braw writers lik Anne Donovan, Matthew Fitt, Ena Lamont Stewart, Liz Lochhead, and Jackie Kay. Bairns ayewis enjoy fan we luik at funny yins in particular.
I’ve ayewis bin interestit in my ain culture, and love that I kin tak it into m classroom. I love that there is mare, and mare writing in Scots. Bairns are loving writers like Ross Sayer, Graeme Armstrong and Ely Percy fir spikin their language. Note to writers: Scots with less swearing wid be appreciated fir the classroom though.

Ony particlar career heighlichts
I made some great Scots freens at an event in Glasgow Uni fae ither schuils, and the Scots Language Centre. It his spurred on my Scots revolution in my ain classroom as there are loads o resources tae use.
It was through this that I was invited to tak a group of bairns to AK Bell library for the launch fir the Scots Map of Scotland. Oor bairns (some EAL) read Scots stories to primary bairns, and even were interviewed for STV. I even got my picture taken wi John Swinney fa was the Education Secretary at the time. It wis great tae hae an event ootside the central belt, and fir us tae be able to jyne in.