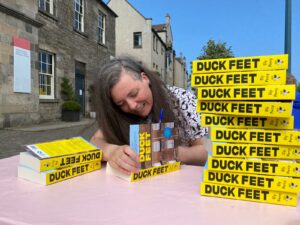 Duck Feet is a comin-of-age novel that begins in the Autumn ae 2001 an ends in the Summer ae 2007. It follies the lives ae workin-class school girl, Kirsty Campbell, an her pals as they go fae first through tae sixth year at the fictional high school Renfrew Grammar, dealing wi things like bullyin, exam pressure, sexuality an teen pregnancy.

Whit wis it got ye involvit wi the Scots leid?
Ma whole life ah’d been gettin told tae ‘speak properly’ – ma parents an teachers at school wid say ‘don’t say aye, don’t say naw or yi’ll never get a job’. Then when ah wis about twenty, ah went tae this evenin creative writin class an the tutor suggested ah should read Jim Kelman’s novel ‘How Late It Was, How Late’. That wis a revelation! Suddenly here wis this thing written in what ah’d previously been told wis ‘slang’ an ‘trash language’ an it’d won the bliddy booker prize! Seein somebody write in the Glaswegian vernacular gave me permission tae huv a go at writin the way ah speak, an ah discovered ah wis quite good at it.

Ony particlar career heighlichts
Seein ma novel on a table in a book shop labelled “Best Scottish Fiction”, then seein ma novel on its own table in a book shop, then bein told told that The Drama’s In The Dialect (the talk ah did wi Harry Josephine Giles an Heather Parry about novels written in Scots) wis considered a ‘stand out event’ in a review ae the Edinburgh International Book Festival!

Wha’s yer plans fir the days aheid?
Ah've got a novella out on spec, an ah'm revisitin a crime novel ah've been tryin tae write fur years, an ah'd really like tae do some spin off stories wi some ae the other characters fae Duck Feet – specifically the LGBT characters because we don't often get tae hear workin class queer voices in Scottish fiction an ah'd really like tae see that change.