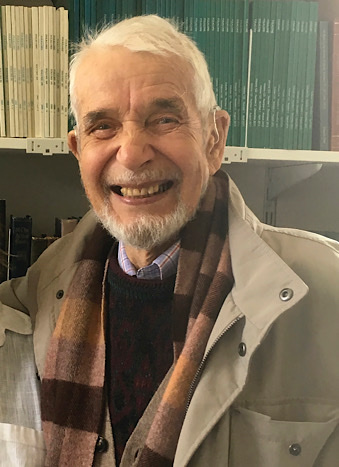 Peter Cooke was born in Cardiff, Wales in 1930. He initially taught music in secondary schools and as a lecturer at Redland College of Education (Bristol) before moving to Uganda in 1964 to work as head of music at Makerere College School. A year later he moved to the newly founded National Teachers’ College at Kyambogo (now Kyambogo University) to establish a new music department. His work in Uganda led him to begin exploring the country’s traditional music initially with the aim of collecting useful materials for his teaching. Peter has published many books and recording on Ugandan music and they can be found here.

Peter returned to the UK in 1968 and in 1969 was appointed to lead research into the traditional music of Scotland at the School of Scottish Studies, Edinburgh University. While there he gained his doctorate with the study The Fiddle Music Tradition of the Shetland Isles (1980) and also initiated ethnomusicology courses within the Faculty of Music.

Peter says it was a huge privilege to be able to research, publish and discuss with colleagues and students the many different musical traditions of Scotland. His early investigation into music-making in the Western Isles led to the production of a film of tweed waulking in the island of South Uist. He also decided that music in the Shetland Islands was one of the most under-researched of the Scottish regions and immediately began to make frequent fieldwork visits there. One of the aims was to collect the data for a PhD thesis on the lively fiddle-playing tradition in these northernmost isles resulting in book The Fiddle Tradition of the Shetland Isles published in 1986 on Cambridge University Press.

Peter enjoyed so many aspects of Scottish traditional music including investigations into older styles of bagpiping and the rich musical culture of the Scottish travellers. This second task led to a partnership with the gifted traveller, the late Betsy Whyte, resulting in the publication of her autobiographies – two books now justly recognised as modern classics.

As a musician however, Peter was also concerned that the best of a huge store of music recordings accumulating in the School’s archives needed to be made publicly available and much of his time and energy, apart from teaching, went into working with colleagues to select and publish music itself rather than words about music. The Scottish Tradition Series – as of 2016, contains 28 issues, the latest entitled Dance-Songs of The Scottish Gaels. Find out more here.

A small number of the 1100+ field recordings, which Peter made during his Scottish researches, have been placed online at the Tobar an Dualchas website. He has also submitted over 300 colour slides for digitizing and archiving at the School of Scottish Studies featuring fieldwork, musicians and storytellers.

Peter took early retirement in 1989 which allowed him more time for research and to resume visits to Uganda and to undertake some archival work. He has prepared his own collection of Indian and African field recordings for deposit in the British Library’s National Sound Archive and in 2002-2003 and visited Banjul as a World Bank consultant to undertake the re-equipping of the Gambia National Museum’s sound archive and the retraining of its staff. While home in Edinburgh in 1994-5 he worked on the Jean Jenkins Archive housed at the National Museum of Scotland. Read more about Peter’s Scottish music research here.

“Most importantly I think for me however, was that Peter was someone whose main field of research was in Uganda, and the attention he paid to Scottish music is a marker of how many ethnomusicologists approach research—viewing it comparatively in relation to other musical traditions around the world—that characteristic is something worth celebrating, and has not always been a facet of the more parochially-inclined researchers of Scottish music who haven’t looked beyond their primary interests to understand the music of Others (and thereby learned more about ourselves).

Peter Cooke is still active campaigning on local issues and school music curricula at the age of 89. http://www.drpetercooke.uk/