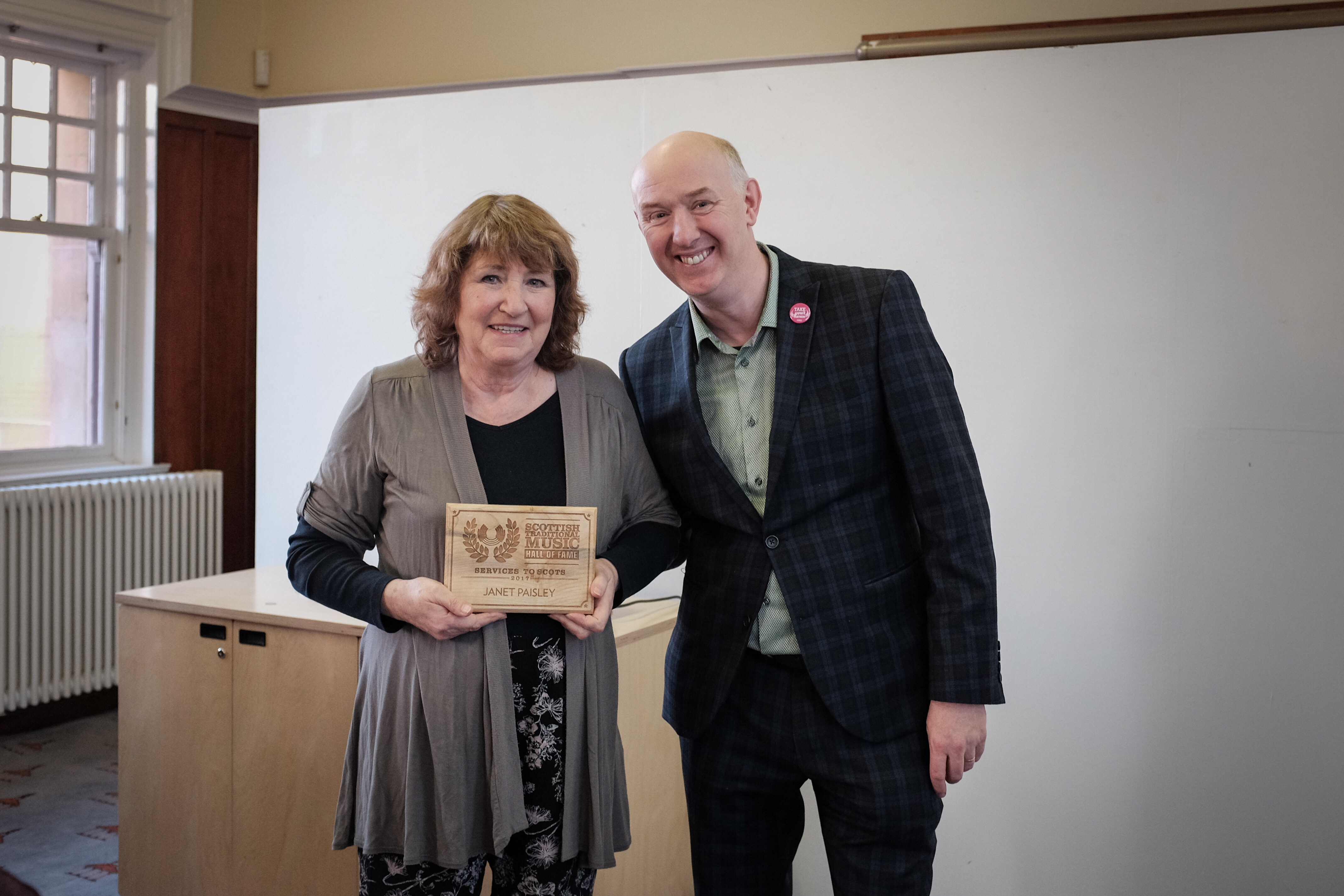 Janet Paisley is a poet, author, playwright, and radio and television scriptwriter who has championed the Scots language through her belief that ‘literature comes from your own doorstep and in voices that you know’ and in her work in education and her local community and as a member of the ministerial advisory working group for Scots set up by the minister for Culture in the Scottish Parliament.

View the photos from our Janet Paisley presentation in December 2017 at the Women’s Library, Glasgow.

She was born in 1948 in Ilford, Essex and grew up in Avonbridge, near Falkirk in a family where everybody read and every house was full of books. As soon as she learned to read herself, she knew that she wanted to write. Her influences extend from the King James Bible, which was her first source of inspiration despite her not having any religious beliefs, to William Shakespeare, Victorian author Margaret Oliphant and across the great literary figures of the nineteenth and twentieth centuries. She has also been affected by the work of fellow Scots women poets, Violet Jacob and Liz Lochhead.

Her own writing career began following the break-up of her marriage when as a single mother, who had originally worked in primary education, she had to find a way of looking after her family and earning a living. Janet began writing for the commercial market and had her first short story published in 1979.  Five collections of poetry followed, interspersed with short fiction and work in theatre, radio and TV drama, film and occasional journalism.

Having been a teacher, she was at ease in classrooms and her skill in giving humorous and dramatic performances of her own work made her a popular visitor to schools. She also wrote for and appeared in several productions for Glasgow’s Mayfest with Bread & Circuses, a group of writers dedicated to lively and entertaining theatrical presentations of the written word.

Her work has been translated into twelve languages, including German, Russian, Lithuanian, Spanish, Hungarian, and Ukrainian, and she has spoken at Russian academic symposiums and the Tolstoy commemoration. She also initiated a Scottish literature collection in Voronezh State University in Russia and has taken part in Barcelona’s theatrical Cartographies of Desire and in reading tours of Paris, Moscow, Slovakia, Lithuania and Ukraine.

As a single parent with six sons to support she found the Scottish Arts Council’s financial assistance invaluable and from 1990 onwards she held two SAC writing fellowships and the Glasgow South writing residency and was awarded playwrights bursaries in 1997, 1999, 2001, 2005 and 2010. She also taught courses in creative writing for Glasgow University’s Department of Adult & Continuing Education and set up the first Scottish PEN women writers’ committee.

She published her first novel, White Rose Rebel, in 2007 and having established a connection with the Jacobite cause with radio stories and a stage play in the early1980s, she continued this through writing the character stations for the Culloden Battlefield Visitor Centre exhibition. A second historical novel, Warrior Daughter, appeared June 2009. The Lasses O, a theatre production based on an earlier radio drama relating the life of Robert Burns, toured the same year and the full play became a Fringe sell-out show in 2010.

Recognition for her work has included the 1996 Peggy Ramsay Memorial Award, the 1999 Canongate Prize, Scottish National, Swanage Arts and MacDiarmid Trophy poetry prizes and Royal Television Society and BAFTA nominations for the short film Long Haul. She also received one of the first Creative Scotland Awards to write Not for Glory, which subsequently appeared in the World Book Day Top Ten Scottish Books and featured on the nation’s favourite books of all-time list of 2005.

Janet passed away in November 2018