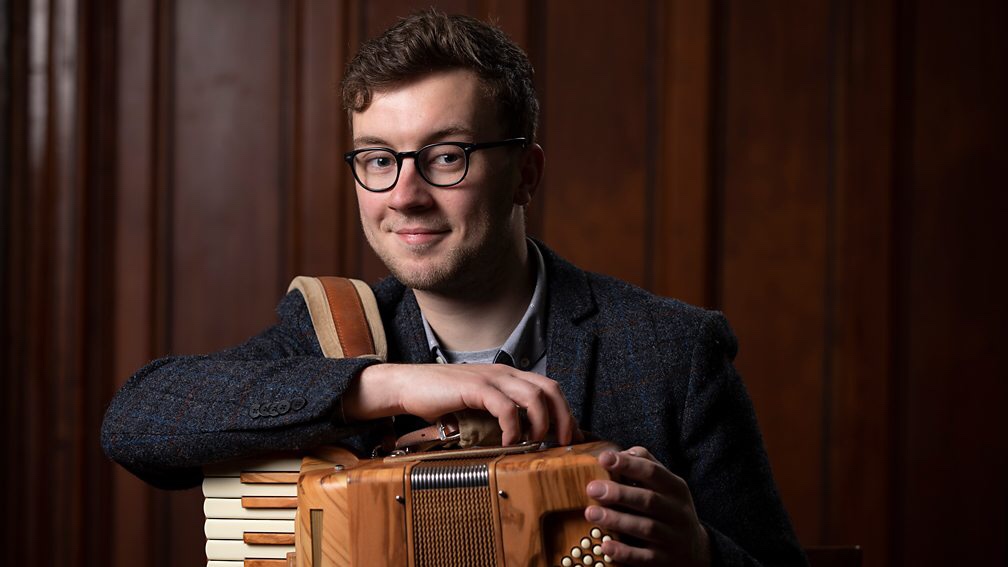 Padruig Morrison from Uist is a finalist in the BBC Radio Scotland Young Traditional Musician 2020. The finals will be held at Celtic Connections Festival on 2nd February 2020 at 5pm. Buy a ticket here or listen live on BBC Radio Scotland or watch on BBC ALBA.

We asked Padruig the following questions:

How did you get involved in Scottish music?
Growing up in Uist I was surrounded by the Gaelic culture from birth, added to which, my father used to sing at traditional ceilidhs regularly, and so there was no way I was going to escape it! I took up the box through the fèis evening classes when I was eight, around the same time I also took classical piano lessons, and carried on with both all through school. I continued going to the fèisean in Uist and to others around Scotland, all of which nurtured my interest in Scottish music, and in push its boundaries.

Why did you enter BBC Radio Scotland Young Traditional Musician Award?
I entered because of the experience and exposure associated with the award, but also to use it as an opportunity to push me towards innovating and stretching the boundaries of the genre more.

What do you hope to gain from the experience?
The experience of performing from such a huge platform will be great in so many ways. It will be a very valuable experience working with the house band, but likewise, I’ll gain experience in working with them on some hopefully more innovative sets and in quite a short space of time!

Do you have any particular musical highlights?
Recent music highlights have included my New Voices commission from Celtic Connections and performing 50 minutes of new music with a group of amazing musicians. I’ve also really enjoyed working with ensembles such as the Hebrides Ensemble, the Hard Rain Ensemble, and with some of the Scottish Chamber Orchestra, as well as touring the west coast a lot with Beinn Lee.

What are your plans for the future?
I hope to do more solo work in future, and with a strong compositional focus. I will hopefully recording an album in the next year made entirely of original music. As well as that, this year will see Beinn Lee’s second album released, and hopefully in the next couple of years some more music will be released from Causeway Trio.

Why not buy a ticket to hear Padruig Morrison or any other of the finalists at the Grand Finals on Sunday 2nd February at 5pm. The finals are part of Celtic Connections festival.