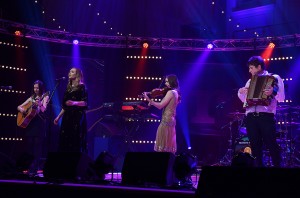 As we count down to Christmas, things have been rather busy! It’s not all work and no play though, I’ve been enjoying some get togethers with friends and family, and enjoying a wee gingerbread latte or two! I hope you are all keeping warm this wintry December, and getting your Christmas shopping finished in time ☺

On Saturday night I attended the Scots Trad Music Awards (or, ‘the office Christmas party’ as it is otherwise known!) at the Caird Hall in Dundee. It was a wonderful evening with great entertainment, lovely speeches and a few laughs! I was performing with my band for the first time, which was part of my prize for winning the Young Traditional Musician of the Year. Three of us in the band were also up for awards – Jenn Butterworth won Tutor of the Year, Andrew Waite was nominated for Up and Coming Artist and I was in the Scots Singer of the Year Category. I was delighted for Fiona Hunter who was very deserving of the award. You can see a list of the other winners from the night here. A highlights show of the evening will be shown on BBC Alba on the 30th December, so you may spot us on that.

On Wednesday I was in the studio at BBC Scotland for a recording session with The Claire Hastings Band. The session was for this Sunday’s Travelling Folk on BBC Radio Scotland. We played four songs from my upcoming album, and I did a one off solo recording of my song ‘That B&B in Dundee’! Tune in from 7pm to hear the songs, plus some live chat with myself and host Bruce MacGregor.

The new album ‘Between River and Railway’ is coming along nicely, and I hope for it to be ready in time for my Celtic Connections concerts at the end of January. I am so excited to hear what you all think about it! It’s been a lot of hard work so far, so hopefully it will pay off. I am really looking forward to touring the album around Scotland in May 2016 with the band.

I wish you all a very happy Christmas and New Year, and hope to see some of you in the near future!

If you would like to keep up to date with my news in the new year, feel free to add your name and email to my mailing list: http://eepurl.com/boF7_D