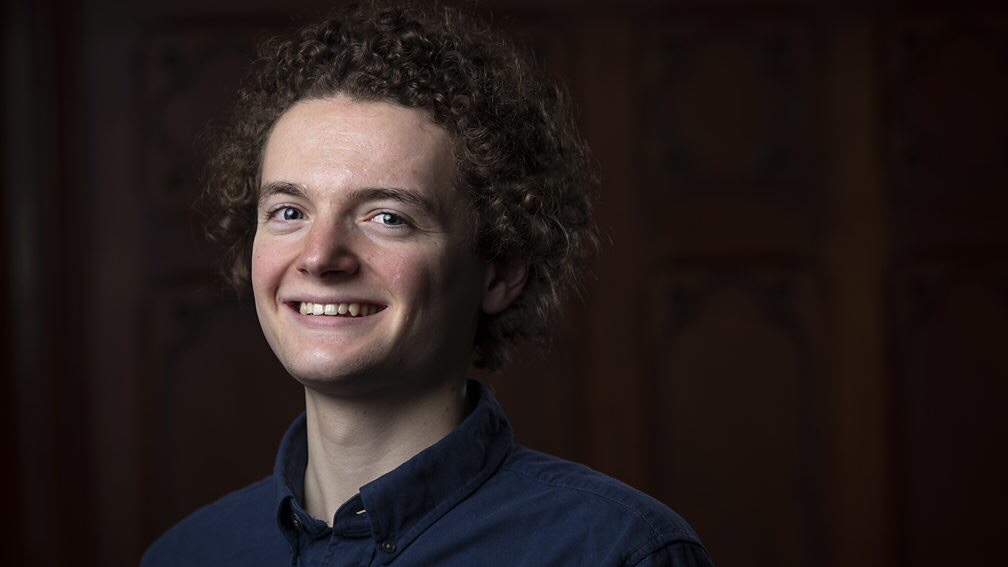 Cameron Nixon from Peterculter, Aberdeen is a finalist in the BBC Radio Scotland Young Traditional Musician 2020. The finals will be held at Celtic Connections Festival on 2nd February 2020 at 5pm. Buy a ticket here or listen live on BBC Radio Scotland or watch on BBC ALBA.

We asked Cameron the following questions:

How did you get involved in Scottish music?
I have always been heavily influenced by different genres of music. Originally learning the violin in primary school, I continued to receive lessons throughout secondary school from Susan Simpson. As I progressed, I joined the school ceilidh band and found that I was more interested in learning about Scottish Traditional music. This was my first introduction into Scottish music. As my dad was an active member of the Garioch Fiddlers in Inverurie, I too began attending, starting in the Junior Section and playing in Fiddlers Rallies. I won the local Garioch Fiddlers competition and I regularly entered the North East of Scotland Music Festival in the Scottish Fiddle Section. I later joined the North East Folk Collective which was founded by Sharon Hassan. This group provided a platform for engaging with other musicians in the North East. We arranged and promoted local music throughout Aberdeen and Aberdeenshire. As I enjoyed learning, playing and singing Scottish Music, I made the decision to complete my final year of schooling at Sgoil Chiuil Na Gaidhealtachd (Plockton Music School). I thoroughly embraced the opportunity to develop my own playing and singing at Plockton as I learnt a great deal about Scottish Traditional Music under the tutelage of Dougie Pincock (Head of School). I sang under the tuition of Wendy Weatherby and received fiddle lessons from Gordon Gunn. We performed in many concerts, went on tour around the Western Isles and released a CD during my year at Plockton. Consequently, this was the turning point for me and lead me to want to pursue a career in traditional music. I was accepted to study at the Royal Conservatoire of Scotland (RCS) in Glasgow. I am now in my final year studying Scots Song on the BMus Traditional Music course under the tuition of Fiona Hunter.

Why did you enter BBC Radio Scotland Young Traditional Musician Award?
Since the BBC Radio Scotland Young Traditional Musician Award was established in 2001 it has long been a prolific award and a goal for many young traditional musicians. In some respects, it has been a great platform for new musicians who are at the beginning of launching their career. The award enables young traditional musicians to achieve recognition in their chosen field of music and to develop as musicians. It also provides the opportunity to collaborate with other great musicians. As the award is now in its twentieth year, which also coincides with me being in my final year at RCS, I felt that it was a great opportunity for me to progress in my career and to set myself a challenge.

What do you hope to gain from the experience?
Prior to reaching the final of the competition, I had a fantastic weekend in Biggar for the semi-finals where I gained a considerable amount from that experience. It was a tremendous privilege to perform with Mhairi Hall and Mike Bryan and it was an incredible experience to hear all the other talented musicians performing. Overall, I hope to gain an insight into working efficiently with accompanists, working well as a team, learning through rehearsals and arranging songs for the final.

Do you have any particular musical highlights?
I have many musical highlights with both Scottish Music and also with Classical Music. At age fourteen, I was given the opportunity to tour with Scottish Opera in “The Magic Flute” as one of the three Spirits – we toured in Glasgow, Edinburgh, Aberdeen and Belfast. As a member of the North East Folk Collective in Aberdeen, we performed at the Royal Albert Hall as part of Music for Youth. I have also had the opportunity to perform with the National Youth Choir of Scotland in numerous places including, Chicago, The Royal Albert Hall with Sir John Eliot Gardiner, La Côte-Saint-André, in Yellowstone and in Carnegie Hall, New York. In my sixth year of school at Plockton we toured the Western Isles playing in many venues. In 2019 I recorded on Malinky’s most recent album “Handsel” and performed it with the band in the Glasgow City Concert Hall as part of Celtic Connections. In October 2019 I went to Cape Breton with other RCS students and Jenn Butterworth where we performed as Ùr in the Celtic Colours International Festival. It was a special festival and there were many highlights and memories made during our time there. We met many inspirational musicians, the hospitality extended to us was exceptional, and it was the warmth and appreciation from the audiences that made our performances special.

What are your plans for the future?
My ultimate aim is to pursue a career as a Scots Traditional Singer and perform as widely as possible around the UK and beyond. I also plan to give private music tuition in both fiddle and voice as I feel that I would like to get others involved in learning Scottish music. As I have performed with a few bands, my other aim is to establish my own band as another means of performing with others. I already play with a couple of duo’s and I would like to continue to perform with them. In addition, I want to compose more of my own pieces and this is something which I am very keen to develop over the next few years, and ultimately, produce a CD.

Why not buy a ticket to hear Cameron Nixon or any other of the finalists at the Grand Finals on Sunday 2nd February at 5pm. The finals are part of Celtic Connections festival.