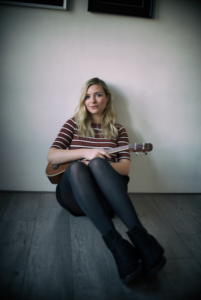 Congratulations to Claire Hastings who have been nominated in Trad Video of the Year in the MG ALBA Scots Trad Music Awards 2019. Vote here! Vote now!

Tell us about yourself
I am a folksinger, songwriter and ukulele player originally from Dumfries. Since graduating from the Royal Conservatoire of Scotland (formerly RSAMD) in 2011 with a degree in Scottish Music, I have toured throughout the UK, Europe and New Zealand as a solo artist, with my band and with Top Floor Taivers. In 2015 I won BBC Radio Scotland’s Young Traditional Musician of the Year award, which allowed me to gain further exposure.

My first album ‘Between River and Railway’ was launched in 2016 (‘exquisite’ Songlines) and this year I launched my latest album ‘Those Who Roam’ at Celtic Connections, which features songs under the theme of travel and journeys.

As well as my own concerts I also work frequently with Live Music Now Scotland, who provide live music to those who benefit from it most including care homes, ASN schools and nurseries. I am currently teaching Scottish music in primary schools throughout Dumfries and Galloway, and also teaching adult choir Blackford Sings part time.

Why are you involved in Scottish music?
Scottish music, culture and history have always interested me, and I find it fascinating that I can sing a song which has been sung by many people throughout hundreds of years.
Folk music has a way of bringing people together, and being able to perform it and carry the tradition is a real pleasure.

Any particular career highlights?
Winning BBC Radio Scotland’s Young Traditional Musician of the Year in 2015 was definitely a highlight. It also gave me the opportunity to perform alongside Lulu, Jamie Callum and Deacon Blue with the Scottish Symphony Orchestra for Friday Night is Music Night at City Halls, which is a night I’ll never forget!

What are your plans for the future?
I plan to continue performing, recording and teaching music.