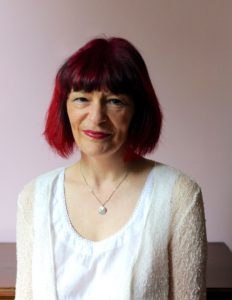 Congratulations to Anne Donovan who has been nominated in Scots Bairns’ Book o the Year sponsored by Scottish Government in the Scots Language Awards 2019. Vote now!

Tell us about yourself
Author of the short story collection, Hieroglyphics and other Stories, and the novels, Buddha Da, Being Emily and Gone Are The Leaves, all published by Canongate.
Recently translated Roald Dahl’s Matilda into Scots for ItchyCoo/Black and White Publishing.

Why are you involved in Scots language?
Writer in Scots.

Any particular career highlights?
Buddha Da was shortlisted for many prizes including the Orange Prize and the Dublin International IMPAC Award, and won Le Prince Maurice Award in Mauritius. Gone Are The Leaves was shortlisted for the Saltire Scottish Literary Book of the Year Award. And now nominated for Scots Language Award.

What are your plans for the future?
Nae idea!