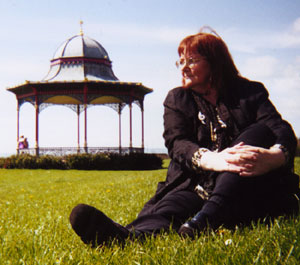 Maureen inherited her love of singing from her Mother, the late Jane Hillis. From the age of four she was brought up in the old Overgate, which sadly is no longer there. As she got older Maureen suffered terribly from shyness and found it difficult to sing in front of people and it was not until she returned to Scotland, having spent fifteen years in England, and became friends with Christine Stewart a fellow Dundonian and who also was a folk singer in Dundee in the sixties that she rediscovered her voice!!. She discovered that it was OK to sing unaccompanied in her own voice and dialect. It was Christine who introduced her to such singers as the Stewarts of Blair, a travelling family who had now settled in Rattray near Blairgowrie. When they first heard Maureen sing they paid her a great compliment by saying she had the “coniach”

Maureen then started going in for competitions, even though it was difficult, and was very successful in winning all over Scotland. This gave her confidence and got rid of some of her shyness. Maureen has never looked back and is a great favourite at clubs and festivals through her love of songs her warmth and great sense of humour.

“The voice of Maureen Jelks is one of the best kept secrets in of Scotland’s traditional music scene. Clear and pure as a choirboy’s, it has all the power and passion of a mature woman”. (quote from Sheena Wellington).
As well as her own two c.d.’s she has contributed to many compilations such as “Scots Women” on the Greentrax label. In 1991 she was one of the singers featured in Jean Redpaths Masterclass for BBC2.

Maureen recently won an Angus Achiever’s Award from her local councilor her achievement’s in the folk world and for promoting Kirriemuir and was named Ambassador for the Arts in Angus 2003 and in 2004 was one of four nominees for the traditional singer of the year.