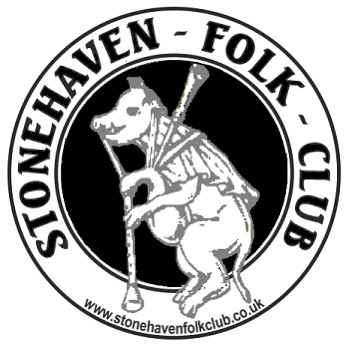 Stonehaven Folk Club has what must be a unique claim to fame. During the club’s first guest night in the Grapevine wine bar in April 1987 the band – Off the Tracks – was rocking. Harmonica player Spider Mackenzie was up on the tables, wailing away and the upstairs neighbours, who had notoriously sensitive ears, were on the phone to the police.

By the time the police burst in, however, Off the Tracks’ singer, Janice Clark, was singing an unaccompanied ballad and the audience greeted their noisy arrival by telling them to “ssshhhh”.

The club had been formed a few weeks before after a chance meeting between Maggie Crowe and Meg Findlay. Maggie had been involved in Aberdeen Folk Club, just fifteen miles up the A90, and having moved to Stonehaven, she was looking to get something similar happening there. Meg knew other people who were interested, so an informal club night was organised and it quickly became clear that Stonehaven could support regular folk music events.

Kenny Hadden, who had formed Blairgowrie Folk Club with his Puddock’s Well bandmates Andy M Stewart and Dougie Maclean, lived locally and between his contacts and Maggie’s the Stonehaven sessions began to attract familiar faces who in some cases agreed to appear at more formal nights for travelling expenses.

In the first year alone, Phil Cunningham, Tony Cuffe and Dougie Maclean appeared at the club, which after a few months had to move from the Grapevine to the Crown Hotel due to the former, for reasons unrelated to folk music, going out of business. So began a sequence in which the club earned a reputation – undeserved of course – for closing down premises. The Crown was superseded by the St Leonards Hotel and it and its successor were superseded in similar circumstances before the club settled into its current home in Stonehaven Community Centre.

By the summer of 1988 the club had branched out to promote the first Stonehaven Folk Festival and although this was established as a separate entity – Meg is the only person who serves on both club and festival committees – a close relationship has seen several bands and singers who have played for the club return to appear, often as headline acts, at the festival.

Indeed, one of the club’s strengths has been its organisers’ ability to spot talent early in its development and their willingness to take a chance on untried musicians. Young Northern Irish band Oige, whose singer Cara Dillon was at school at the time, made the transition from club guests to festival attractions and more recently Lady Maisrie and the Young’uns have appeared at the club before going onto reach a wider audience.

Meg also points to the dedication shown by successive committees over the years in keeping the club thriving, with Andy and Pat Popplestone, the current chairperson and club organiser/booker respectively, earning special praise for their hard work in recent years.
Stonehaven Folk Club has now twice won the Club of the Year title at the MG Alba Scots Trad Music Awards, in 2016 and 2009, and its interaction with Scottish Culture and Traditions, the Aberdeen-based body that promotes awareness and growth of Scottish traditional culture, has resulted in a two-way infusion between the organisations.

Thirty years on the sessions with which the club’s activities began remain an important and very popular element of its calendar. The atmosphere they have created is welcoming and the themed nights they have devised in particular have encouraged singers and musicians to apply their imaginations in finding new songs and tunes. In the interests of decorum, however, it’s probably best to gloss over what these imaginations came up with for the Body Parts evening, lest another police raid results.