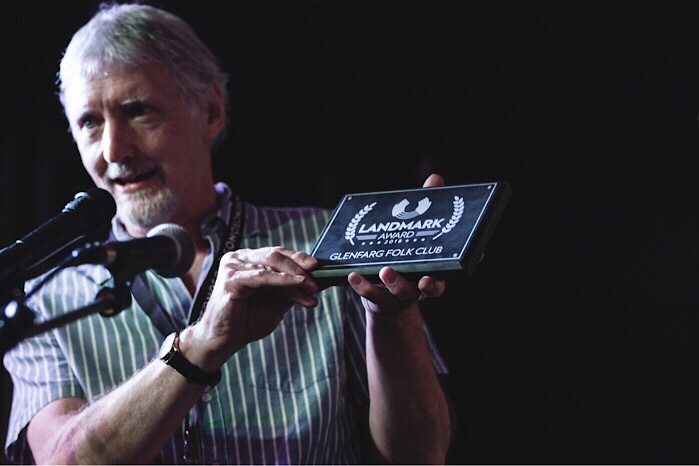 Glenfarg Folk CLub folk club first met on Monday 3rd April 1978 in the Glenfarg Hotel. Happily someone at that first club night produced a cassette tape recorder and recorded the proceedings, including the introductory remarks of founder member Andy Ramage, and this recording still exists (now transferred to CD).

The name Glenfarg Village Folk Cub was to distinguish it from the already established GFC – the local football club. Indeed some say that the Folk club was the natural development from singsongs on the bus after GFC football club matches – singing which continued back in the hotel very much supported by the hotel owner at that time, Jim Hunter. Be that as it may, that time was very the heydays of folk clubs developing across the country, and within a year of forming the club membership grew to over 100.

The club’s early years very much reflected the folk scene at the time, lots of the great names coming along as the artistes. Apart form artiste nights there was always a lively range of social activities and outreach visits to other clibs and folk festivals, including the very popular visits to the Orkney folk Festival. In the 1980s there were also big events such as the 24 hour singaround in Glenfarg as part of Folk Aid for Africa (at the time of Geldof’s Live Aid concerts), and the club wax also quite heavily involved in the concert in support of those involved in the Lockerbie disaster.

The Annual Folk Feast started as the first birthday of the club in 1979 so the 40th birthday is also in the same week as the 40th Folk Feast. Again the line up for these feasts over the years is a typical “who’s who” of the best in folk music at the time.

Like many folk clubs Glenfarg move has moved venue quite a few times over the years, very much reflecting the fortunes and interests of the various hotel owners. In the main it spent most of its life within Glenfarg itself, either at the Glenfarg Hotel, the Lomond Hotel, or up the road at the Beinn Inn at the other end of the glen. However in November 2015 the sudden closure of the Glenfarg hotel and its planned change of use to housing, led to the move to Kinross, were we have found a very welcome home in the Backstage Venue, with great support from David Mundell of Mundell music.  They still retain the name, slightly altered to Glenfarg Folk Club – at Backstage at the Green, Kinross.

This reflects their desire to retain the long heritage and great tradition of the club while at the same time showing that they are in Kinross to stay and want to fully integrate the club into the town and its people. Now two years on they are delighted to see numbers rising again at club nights and in particular the growing number of people from Kinross and neighbouring Milnathort becoming regulars at the club.

So from the heady years of the 70’s and 80s through some leaner times in between the club is delighted to see that it continues to build on its strengths, has the same ethos of friendly welcome, lots of joining in with song and harmony, and now once more a growing attendance a growing membership  in our new home. There is much to delight in, and hopefully a long and happy future here.