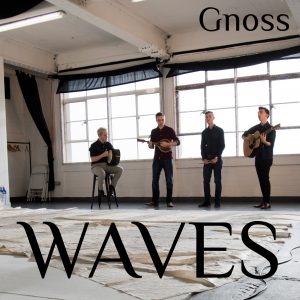 Waves is the debut single from Glasgow-based folk band, Gnoss.
Recorded and mixed by Scott Wood (The Scott Wood Band), ‘Waves’ marks Gnoss’ progression from an award-winning duo to a charismatic and energetic folk band.

Gnoss are a dynamic new four-piece of fiddle, flute, guitar and percussion, that tackle energetic tune sets and driving folk song with a “maturity of ability many of a greater age will envy” (Living Tradition).

All current students at the Royal Conservatoire of Scotland, Graham Rorie, Aidan Moodie, Connor Sinclair and Gregor Kincaid have been tipped as “ones to watch” (Songlines) for their lively, engaging and honest performances.

Forming as a duo in 2015, Gnoss (Graham and Aidan) picked up a prestigious Danny Kyle Award at Celtic Connections. Since then, they have reached the Semi-Finals of the BBC Radio 2 Young Folk Award (2016), performed at the Royal Albert Hall as part of Music For Youth’s 2015 Proms, and brought out their well-received first album ‘Gnoss’ (“A promising and engaging debut.” – Songlines). They’ve also supported acts such as Sharon Shannon, Blazin’ Fiddles, Seth Lakeman, RURA, and Liz Carroll.

Now armed with a new line-up, the release of their debut single ‘Waves’, and a tour of Scotland planned for Easter 2017, Gnoss look set for another great year.